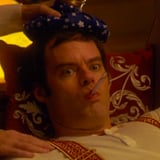 Disney+'s Noelle proves that being Santa Claus is harder than it looks. The upcoming holiday film stars Bill Hader and Anna Kendrick as the children of Kris Kringle, and POPSUGAR has an exclusive first look. After their father announces his plans to retire, Noelle (Kendrick) tries to help her older brother Nick (Hader) take the reins as Santa. And based on this clip, it looks like Nick is having a pretty hard time adjusting to his new role.

The film, which also stars Billy Eichner, Ron Funches, Julie Hagerty, and Shirley MacLaine, hits the streaming service on Nov. 12. In the meantime, get into the holiday spirit by watching the cute clip.